Fireproof doesn’t mean a fire will never come, but that when it comes you’ll be able to withstand it.

It was really him! I had finally found him!

Forgetting that it was 4:30 am, I sprinted to the bedroom to tell my husband about my amazing discovery.

“It’s him! It’s him!” I yell-whispered. “I found the – oops. Are you awake?” I asked, glancing at the clock. “You are? Oh…that’s good. I just have to tell you – the stagecoach guy? The Deadwood barber? He’s my third-great-grandfather!”

Some discoveries stand out more than others, don’t they? When I learned that my third-great-grandfather was a bit of a Deadwood legend, I knew that he was one of those discoveries. I would later write my very first genealogy article about that stagecoach guy, better known as Johann Conrad (J. C.) Muehleisen. His story was like something out of a movie, and it will always be my favorite discovery.

I used to say that finding J. C. changed the way that I conduct research, but looking back, I see that I was wrong about that. I discovered J. C. after I made those research changes, thanks to a pack of lies told by his mother-in-law (my fourth-great-grandmother), the first Melcena. If it hadn’t been for her, I never would have found him after the fire.

The Widow Starts A New Life

As the Civil War came to an end, Melcena Irvine O’Neill was ready to make a fresh start. Her husband was dead (to her, anyway), the kids were growing up, and she was mighty tired of all the small-town gossip in Mount Vernon, Ohio.

If she sold the house she could pay for the move, and if she altered her life story a bit, she could…oh, could she really? But what if someone asked about…him?

That wouldn’t happen, would it? Who would dare to question a grieving widow just one year after the war ended? It just wasn’t done!

Could she do this? At age 47, could she start over?

She decided that she could.

On 21 August 1866, Melcena and her children sold their Mount Vernon home; by 1867 they were living at 273 Catherine Street in Chicago [2]. The city was good to them at first. Her son George worked as a carriage trimmer for Coan and Ten Broeke, while John worked as a scroll sawyer for West & Warnick [3]. Soon, her daughter Gabriella would meet and marry J. C., a dashing young barber who (like Melcena) was hiding a few secrets of his own [4].

Who was the new Melcena? According to directories and census records, she was the widow of George P. O’Neill, she was the mother of five children, and she was fairly transient [5]. After she settled on Chicago’s south side, she probably kept to herself, though her children’s names appeared in newspapers from time to time.

By 1871, the O’Neills were living in the 100 block of Chicago’s fourteenth street, just one mile from a family by the name of O’Leary [6]. That year, two Chicago directories would be published, but sadly, the O’Neills would only appear in one of them.

Melcena’s new life, which had started with such promise, was about to come to a shocking end.

The World’s On Fire

In the evening hours of 8 October 1871, a fire started in the vicinity of the O’Leary’s barn at 137 DeKoven Street, just one mile from the O’Neill’s home. It would go down in history as the Great Chicago Fire, and by the time it was over, 300 lives would be lost, 17,000 buildings would be destroyed, and 100,000 residents would be homeless [8].

The O’Neills would escape with their lives…and little else.

It really wasn’t a frivolous question this time, though. It was a statement, and it contained no doubts.

Melcena could start over, and she would.

In the aftermath of the fire, Melcena moved her family back to Ohio and accepted help from relatives. The O’Neills lived first in Cleveland and then in Cincinnati, but both cities were just rest stops on the journey home to Chicago [9].

By 1873, Melcena and her daughters were living in Fort Wayne, Indiana [10]. Just one year later, George and John returned to Chicago [11]. Melcena would soon follow, and she would never leave the city again.

Melcena passed away on 22 January 1891 and was laid to rest in Chicago’s Oak Woods Cemetery [12]. Her obituary contained only the most basic of details, but a strategically-placed advertisement told the real story about this resilient woman [13]. The word was meant to describe the Chicago Opera House, but it spoke volumes about Melcena as well.

That word, of course, was fireproof.

She was not famous or infamous. She will not be remembered in any history books. But the first Melcena had a story, and an amazing one at that. She was strong and determined. Indeed, one might even say that she was fireproof.

Oh, and she was also just a little bit dishonest, believe it or not.

At first, it was hard not to believe Melcena’s story. It was so inspiring that it seemed wrong to doubt any part of it. That poor woman, widowed so young, and with five children to raise! Imagine the courage it took to start a new life, only to lose everything in the Great Chicago Fire. But did Melcena give up? No, she did not. Instead, she worked hard, she persevered, and she returned to the city that had become her home.

And just look at what happened to her children! All of those marriages and spouse deaths? Imagine the strength it took for Melcena to support her family during all of those tragedies. It was just unbelievably inspiring, and…

…actually, some of it was just unbelievable.

Yes, I had doubts about Melcena’s story, but that turned out to be a very good thing. Once I began to doubt her, researching her life actually became easier. I soon learned that she wasn’t a widow at all, though she told that story for decades [14]. On the contrary, her husband “…deserted his wife and 5 children when he returned to Ireland.” Though I haven’t discovered the rest of that story yet, I am certain that Melcena lied in order to protect herself and her children.

“And if she lied about that,” my little voice reasoned, “what else did she lie about? How about those deceased spouses…like J. C. Muehleisen?”

I decided to take a second look at the “first” death of J. C. Soon, I found myself on a genealogical journey that started at the O’Leary’s barn and ended in with an amazing discovery in 1880s Deadwood.

Yes, a bit of doubt can be a very good thing, indeed. I’ll always be thankful to the first Melcena for reminding me of that fact.

Sometimes, the things we find after the fire are simply amazing.

8 thoughts on “The Things We Found After the Fire” 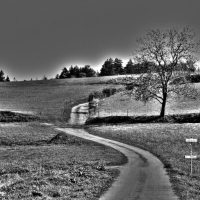